In October 2015, Shepard Fairey and his team painted a mural on the side of our LEED Platinum office building, near the corner of 15th and Race Streets in Philadelphia. 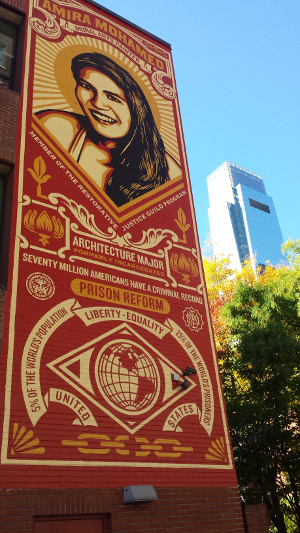 Entitled “The Stamp of Incarceration: Amira Muhammad,” the mural was one of two that Fairey created on the topic of mass incarceration and reentry into society. The two murals were commissioned by The City of Philadelphia Mural Arts Program as part of a temporary, major citywide exhibition of public art called #OpenSourcePHL. Friends Center’s mural remained in place two years after the exhibit closed.

Read more about the two Shepard Fairey murals on the #OpenSource website.

Dedication
The mural was dedicated by the Mural Arts Program on December 1, 2015, in a ceremony at Friends Center. Amira Muhammad spoke, as did Mayor Elect Jim Kenney. We hope to upload photos soon. See the event invitation here.

We remain CLOSED Saturdays except by prior reservation for events.

Central Philadelphia Monthly Meeting (CPMM) of Friends (Quakers) has resumed in-person meeting for worship on Sundays at 11 AM, with an option for online participation. Consult the CPMM website or contact the Meeting office for details.

Friends Center will post any further changes to its hours here and on our social media accounts.

A Quaker Space for Our Time

The theme of the August 2016 issue of Friends Journal magazine was "Quaker spaces." Featured: Friends Center: A Quaker Space for Our Time.